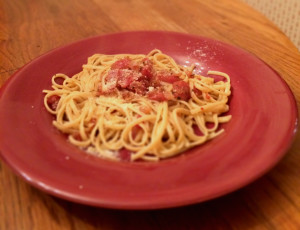 I’m not sure why, but when I need to make a quick and easy meal, pasta is what I go for. This particular dish was a “what has it got in its cupboardses” dinner (I probably should go shopping more often). The dressing – I hesitate to call it a sauce – comes together in roughly the time it takes to boil the water and cook the linguine, which means that this can be put together in 15-20 minutes. It scales very nicely too.

This stores pretty well for 2-3 days, too, and is just as delicious cold as hot (at least to my taste buds).

If there’s one thing I miss living out in the woods, it’s that I can’t get Chinese food delivered to my house. The closest real Chinese restaurant – I’m not counting the Jesse Wong’s about ten minutes away – is about fifteen miles down the road, and it’s the only one left of four or five that were here a decade ago. (And it’s much more focused on takeout and delivery than on eating in; it has three Formica tables with plastic chairs that probably date back to the Nixon administration.)

The beauty of stir-fry, though, is that it’s quick and easy to make at home. You’ll need a wok or a skillet, a sharp knife, a cutting board, a spatula, a plate and bowl, and a stovetop – that’s it. Even the ingredients are easy to find.

As an aside, let’s talk about woks and skillets for a minute. If you have a large skillet, ten inches or more at the base, you can easily use it for stir fry, but you’re going to lose some of the effect of the wok. Personally, I love my wok, and if I can get away with using it to cook something I will. But when you’re cooking stir-fry, some woks and skillets are better than others: specifically, you want a steel or cast iron pan for cooking stir-fry. This isn’t elitism or me being in bed with the Cast Iron Wok Industry; it’s a matter of safety. Stir-frying is done at really high temperatures, and it’s possible that if you have a non-stick wok, the heat will cause the coating to come off the wok – and you don’t want Teflon in your stir-fry.

If you have a thermometer that measures high enough – a candy thermometer ought to do – turn your burner to its highest setting and measure the temperature of the air as close to the coils or flames as you can get it without touching. If that temperature is below your wok/skillet’s safe cooking temperature, you’re fine. Otherwise, consider shelving this recipe until you can put your hands on a carbon-steel or cast-iron wok or skillet. (If it helps, they can be had from Amazon – so being in a small town isn’t an obstacle! – and while they’re more pricey than a non-stick version, carbon steel and cast iron last forever if you take care of them. They do need to be seasoned, though – but that’s easily taken care of.)

Anyway – back to the cooking! This recipe serves 2-4, and is delicious over rice or noodles (although it does not, as a dry stir-fry, produce much sauce at all) – and it’s a great quick dinner, because it takes less than 30 minutes from start to finish. (Even less if you’ve done the prep work in advance!)

At this point you can put everything in sealed containers in the refrigerator – keep the meat and vegetables separate! – and store it for up to 24 hours. The vegetables will obviously last even longer.

I’ll start off with one of my favorite dishes to make (and one of my son’s favorite to eat): spaghetti. I made this last night, but forgot to take a picture, so I’ll add one the next time I brew it up.

This spaghetti sauce is based on my mother’s recipe; I’m not sure where she got it. It’s easy to make both on the stovetop or in a slow cooker; I tend toward the latter since at the moment I only have one pot and I need to devote it to the noodles. I’m doing my best to keep this low-salt and low-fat, which means that the natural flavors of the ingredients really come out.

(Plus noodles of your choice; I like thin spaghetti, but we’ve eaten this with traditional spaghetti noodles, spaghetti rigati, linguini, and rotini.)

(Plus a pot for the noodles. If you only have one pot, you can move the sauce to a chafing dish or bowl while you make the noodles; if you can, keep it in an oven at the very lowest temperature until it’s ready to be served.)

Cooking
(A note: when I say “pot”, I mean whichever of the soup pot or slow cooker you’re using.)

That looks like a lot of steps, but it’s actually quite easy in practice – the key is setting everything up ahead of time. Rinsing the beef removes a huge amount of the grease that would otherwise be going into the sauce, which helps keep the sauce more unified (the grease tends to separate from the tomato purée during cooking). Placing the jalapeño on top, rather than mincing it and adding it to the mix, gives the sauce a more subtle heat and jalapeño flavor without the heat becoming overwhelming.

You can use turkey in place of the beef, but I find that the flavor is quite different and, frankly, I don’t like it as much.